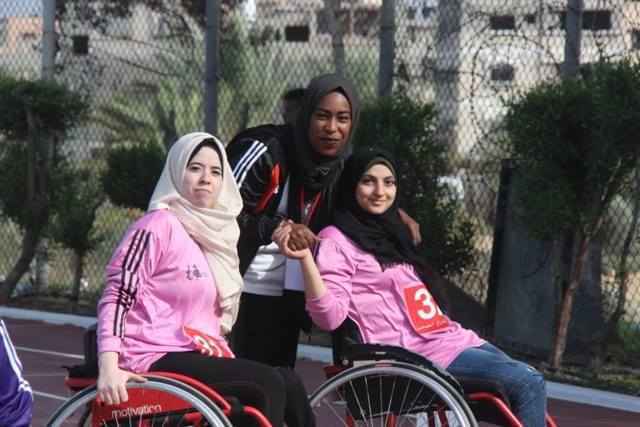 We are fundraising to support athletes, organizers, and community in Gaza!

Our initiative transcends factional identities, age, gender, and physical abilities to unite Palestinians together through sports for enjoyment, play, normality, and community building. This grassroots initiative helps heal communities, strengthens bonds, and promotes nonviolence as a response to an ongoing military occupation, siege, and blockade.

The tournaments are held in Gaza, Palestine.

The Rachel Corrie Ramadan Football Tournaments are football (soccer) tournaments. The Rachel Corrie Tournament for Athletes with Disabilities hosts competitions of football (soccer), wheelchair basketball, table tennis and goal ball (the most popular sport for the blind in Palestine). This tournament provides a sport venue to showcase the skills of athletes who are deaf, amputees, paraplegics, or have suffered from polio. Women are also eligible and encouraged to participate in this tournament.

The 2018 Rachel Corrie Ramadan Football Young Men's Tournament consisted of 352 participants on 32 teams. The 2018 Juniors Tournament consisted of 160 young athletes (ages 17 and under) and 16 coaches, all from Rafah, for a total of 176 participants. Over 3,000 spectators attended the tournaments, and many more viewed the games recapped via our website. The 2017 Tournament for Athletes with Disabilities consisted of more than 250 athletes with disabilities representing 14 clubs covering all Gaza Strip governorate from Rafah in the south to Beit Hanoun. (2018 numbers will arrive soon.)

Our objectives are to provide a safe place for sports enthusiasts and athletes to gather and participate in athletic events, encourage peaceful grassroots organizing, affirm the place of the disabled in Gaza society, and provide an opportunity for female athletes to participate in a public forum.

The enduring military occupation of Palestine is the primary issue addressed by our initiative. Individuals affected by ongoing siege and its associated trauma will find positive role models and examples of community members addressing their immediate situation – working together, creating healthy outlets to dispel stress, and peaceful community relationship building. The initiative also reaffirms the place and value of the disabled and women participating in public forums.

Currently, we are fundraising for $30,000. This will fully cover the initiative for one full year. Each tournament costs between $8,000-$10,000, respectively. In addition to the social and emotional impact of the initiative, we are very proud of the economic impact of the tournaments. They provide employment opportunities for persons with a wide range of skills, such as referees, coaches, accountants, videographers and photographers, and youth assistants. Additionally, materials and supplies are sourced locally, supporting vendors and businesses. Our organizers do a fantastic job at creating well-rounded and marketed tournaments within reasonable budgets!

The Rachel Corrie Foundation reviews annual proposals from Gaza and checks the names of recipients of funds against the U.S. Department of the Treasury's Office of Foreign Assets Control Specially Designated Nationals and Blocked Persons List to meet recommended legal standards. Funds for the Men's & Junior's tournaments are then wired to the Women's Program Center-Rafah and funds for the Tournament for Athletes with Disabilities are wired to the Al-Basma Club for the Disabled. The respective partners are responsible for distributing funds and collecting receipts, project reports, and evaluations from the project administrators and organizers in Gaza.

Thanks to grassroots organizing and international support over the last decade, the initiative has grown from the original Men's tournament to now include three tournaments that engage hundreds of athletes varying in age, gender, and physical ability on an annual basis. Thousands of spectators gather in a non-politicized community space, and the audience has expanded to the virtual sphere with media coverage provided online through journalists, social media, and extensive video footage.

Organizers have grown the initiative to encompass individuals of varying ages, gender, and physical ability while keeping peaceful engagement and nonviolent resistance at the forefront of all work.

"The Rachel Corrie Ramadan Football Tournament is a celebration of the spirit of the Palestinian community in Gaza. It is an opportunity for people to get together, for fleeting moments to look passed the scars of war, the ongoing struggle under siege, and the anxiety of the pain that is yet to come, and seek unity, togetherness and the love for sports. Gazans are resilient people. Their struggle is deep-rooted and recurring. But they always find a way to prevail, and somehow to survive.

The Ramadan tournament, which carries the name of Rachel Corrie, whose memory is cherished by all Palestinians, is one platform that helps Gazans articulate, yet once more, their insistence on their love for life, and hope for the future, despite every attempt at denying them life, and depriving them of hope. It is a project that I fully support and endorse. It is pure in its intentions, and noble in its message. Please support the tournament, this year and every year."
– Dr. Ramzy Baroud, Palestinian-US author, editor and journalist.

To learn more about this initiative head over to our project page.